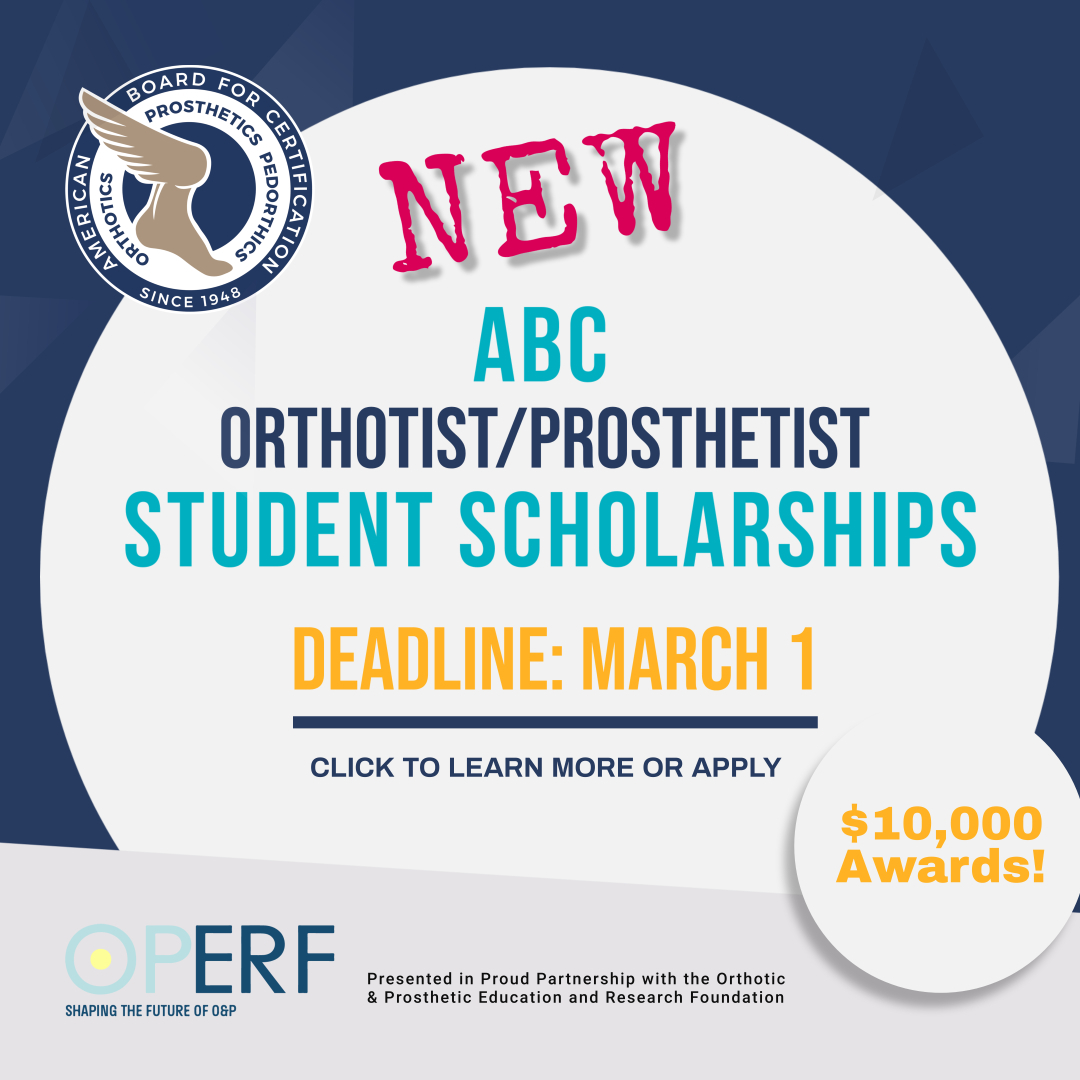 ALEXANDRIA, VA – The American Board for Certification Orthotics, Prosthetics & Pedorthics (ABC) is excited to announce that it will partner with organizations such as the Orthotic and Prosthetic Education and Research Foundation (OPERF) to offer $1 million in OP&P scholarships over the next five years to orthotist/prosthetist, technician and pedorthist students attending a Commission on Accreditation of Allied Health Education Programs (CAAHEP) accredited education program.

Each of ABC’s scholarships include designated diversity scholarships created to support the academic success of racially or ethnically underrepresented student populations in the OP&P profession. ABC hopes this much needed financial support will help bring diverse and talented individuals into the profession.

Additionally, ABC has created a Student Poster Prize program in which three prizes totaling $2,500 will be awarded to outstanding student-created posters accepted for presentation at the American Academy of Orthotists and Prosthetists’ Annual Meeting and Scientific Symposium. Also, in conjunction with the Academy’s meeting, ABC funds a Resident Travel Award for one current resident (or practitioner who has recently completed their residency) to present their Directed Study report or project.

"We are thrilled to be able to support the future of OP&P through these scholarships and awards, including specific support for students from as many backgrounds and perspectives as possible. As our amazing profession continues to grow, so too does our voice and ability to make a difference,” said Brett Saunders, CPO, FAAOP, ABC President.

ABC, in proud partnership with the Orthotic and Prosthetic Education and Research Foundation (OPERF), is pleased to announce the recipients of the 2022 inaugural ABC Student Achievement and Student Diversity Scholarships.

Essentially Women (EW) presented the award to Walsh Aframe at a special ceremony during Focus Conference 2022 in Clearwater Beach, Fla. Mary is the owner and founder of The Women’s Image Center in Worcester, MA.

The Orthotic and Prosthetic Education and Research Foundation (OPERF) and the American Board for Certification in Orthotics, Prosthetics and Pedorthics (ABC) are proud to announce the recipients of the 2022 inaugural ABC Student Poster Prizes.

ABC and NCOPE are proud to announce that the established education and certification pathway to the Certified Orthotist-Prosthetist (CPO) credential was approved as an accredited Prosthetist/Orthotist Level Pathway by ISPO.

The five national organizations that comprise the Orthotic and Prosthetic (O&P) Alliance stand in strong opposition to any direct-to-consumer delivery model for the provision of custom prostheses or orthoses...

We Are ABC. This year’s report summarizes our activities during this year. See highlights of our successes and important data on our programs.

ABC is excited to announce that it will partner with organizations such as the Orthotic and Prosthetic Education and Research Foundation (OPERF) to offer $1 million in OP&P scholarships over the next five years.

OPERF and ABC are proud to announce the recipients of the 2021 OPERF/ABC Student Award for Academic Achievement and Resident Travel Award. Congratulations to these outstanding students and residents!